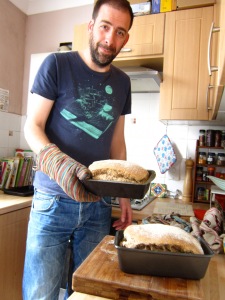 Today I completed my challenge to bake some bread. My dog Juju woke me up early needing a wee, so, rather than going back to bed, while it was quiet and before anyone else was awake, I made myself a nice cup of tea and set about making wholemeal bread from a wildly complicated recipe in my vegan cookery book.

I rarely follow recipes as I’ve never got all the ingredients, or the recipe looks like something I already make, or I just get bored, but this time I knew that any deviance from the instructions would end in disaster so I followed them to the letter.

And it actually came out alright! My finished loaves were a bit stodgy but even my fussy 2½ year old didn’t complain. In fact I’ve just bought another bag of flour for the next batch.