It was last year that I first mentioned my 40 challenges to my friend Karen. She suggested that she could give me a challenge. We had just been talking about how excrutiating I would find some of the hippy workshops that she goes to, shamanic journeys, reiki healings and the like. So that was of course what she thought would be a good challenge for me. My partner and I moved away from Karen so it made it difficult for us to attend any workshops. Instead she challenged me to do something she had been doing online: a 21 day gratitude challenge on Facebook. Every day I had to post three things that I was grateful for that day on The Gratitude Club Facebook group.

I did it. It was tough. On some days I had just done the same that I do every day. Get up, make porridge, go upstairs to work, walk the dog at lunchtime, go back to work, make dinner, put my boy to bed, watch crap on telly, go to bed, repeat. But having to find things that I was grateful for kind of made some bits of the day sparkle. The walk with my dog was a memorable little jaunt with my best friend. Putting Elliott to bed was a fun little moment having a splash in the bath. Life is all about moments after all.

I didn’t like posting my thanks on a public website though. It seemed smug sometimes. On a site that’s about presenting a public profile it didn’t seem balanced showing a purely positive perspective when sometimes you’d had a crap day. Life’s not all roses, nor is it meant to be. For that reason, I don’t think I would carry on doing this practice. It was certainly enlightening though.

Skinnydipping on Exmoor. Done. It was beautiful (for me)! 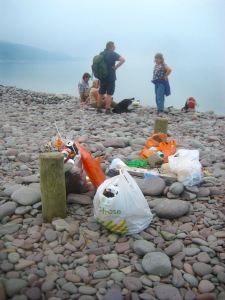 How much does it take to organise a beach clean-up? Bring along a couple of bin bags? Whoever was meant to be organising the Marine Conservation Society’s Great British Beach Clean at Bossington Beach, just down the road from Minehead, couldn’t even do that. About 10 volunteers turned up – including me so that I could tick off my ‘volunteer’ challenge – but no organiser. We stood around for a minute or two and then decided to just start collecting rubbish ourselves.

My dog Juju can’t walk very far now so she just sat down on the rocks and refused to go any further while I wombled up the beach picking up the odd bit of litter. I didn’t have a plastic bag so I had to use one of Juju’s poo bags to collect rubbish. Plastic bottles wouldn’t fit in it so I had to balance them in my arms.

Considering the beach already looked pretty clean we collected a fair bit of rubbish. Someone nipped back and got a couple of bin bags and we managed to fill them.

I don’t feel like I earned this challenge. Maybe I need to do something else.

Yesterday I photographed the Dart 10k swim. I’m going to try and get an article in a magazine published about it. More news soon. Until then, here are the photos I took.

UPDATE: I didn’t get a magazine article published. Boooo. 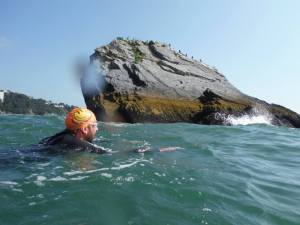 The outdoor swims I’ve done lately have had a slight element of not wanting to be there, whether that has been to finish a bit quicker or that I was cold and didn’t like it and wanted to go home and have a cup of tea. They were all great experiences but I had a niggling feeling that something was missing: a certain amount of joy. My swim to an island changed all that and I’ve got a theory as to why.

I met up with Gary and Claire and members of Happy Wild Swimming – a group who go swimming purely for the joy of swimming outdoors – in Torquay. With their expert local and marine knowledge they knew when it was best to tackle the reasonably short but challenging swim to Shag Rock, just off Meadfoot Beach. On the day we chose, the sea was lively to say the least but with the beautiful Mediterranean sunshine it was hard to cry off.

Five of us waded into the waves and headed off towards the island. Okay, it’s technically a rock not an island but a small landmass surrounded by water is a good enough definition for my challenge.

The water was a lovely clear bluey-green and I was able to put my head in the water for longer than I ever have before to do the front crawl. The sea threw us up and down like we were on a rollercoaster but thanks to Gary & Claire’s positive light-hearted attitude I didn’t feel scared at all, just exhilarated. 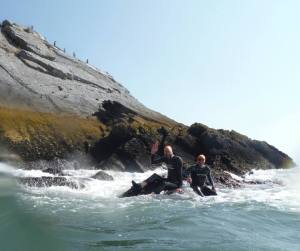 After 10 minutes or so we reached Shag Rock. The waves were really crashing against it and I didn’t think we’d be able to actually land on it but, after some coercing from Gary, I managed to sit on a rock at the edge of the island with him and get the money shot before the waves pummeled us off our perch.

We swam round the island and reluctantly headed back to shore, covered in seaweed and scratches but euphoric after our shared adventure.

So what put the joy into this swim? It wasn’t particularly the scenery or the ticking off of another challenge, it was the company, the shared camaraderie and the positive, joyous attitude of all the swimmers.

Most good walks involve a little bit of fear. A steep rock climb or a narrow cliff path always spices up a walk. But when that fear is a constant terror for 3 solid hours it gets a bit much.

I started my night walk at Bossington near Minehead and headed up Selworthy Hill just as it was getting dark. Within minutes I had bats whizzing past my head at lightning speed. I held up my map and hunched my shoulders. Then the path became very narrow as it followed the edge of the cliff. And then it became very steep. Battling the impulse to turn around and run back to my car screaming, I carried on, shining my torch to be able to see the barely recognisable path. It was hard walking but I didn’t stop to rest, I was too scared. By now a steady terror had set in.

After an hour or so I reached Selworthy Beacon where I calmed myself down enough to get my camera out and take some photos. I was quite proud of myself for conquering my fears of the dark. I set off and ate a chocolate biscuit to reward myself.

Just then a small shape emerged from the bushes and ran straight at me. I couldn’t get my torch on it fast enough to see what it was. It lurched away from me and ran round in circles, dust flying up from the ground as it skittered around. I panicked and shouted but, because my face was filled with chocolate biscuit, all that came out (apart from crumbs) was a “Mmmmnnngggg! Mmmmnnnnn!” as I stamped my foot on the floor to scare the creature away. It was like being stuck in a nightmare where you’re scaring away a demon but someone’s covering your mouth!

It was a rabbit. Or a hare. It ran away and I fell into fits of relieved nervous laughter.

The rest of the walk was filled with a similar terror, mainly from my own imaginings. I whistled to calm myself down but just imagined someone else whistling the same tune from the darkness.

I was glad to get back to the car but it was hard to shake off the fear as I checked the back seat of my car to make sure no one else had got in. It wasn’t until I was back in bed that I felt safe again.

It felt like a proper adventure and I think I really earned this tick on my list.

I’ve wanted to pray for a while now but the thing is, I don’t believe in god.

It started when I got high from going to a singing class. It made me realise why churches encourage people to sing. It’s because singing, really belting out with other people, makes you high and gives you a feeling of connectedness: perfect if you want people to believe in a higher spirit.

I still don’t believe in a higher spirit, but it made me think about what else churches were good at, things like providing a sense of community, raising money for charity, welcoming all in a show of equality and giving everyone a safe, sacred, peaceful place to reflect. I don’t think I should be denied these things just because I don’t believe in god.

The best thing about churches is that they’re open to all and I think we should all use them, religious or not. So I gave myself a challenge of having a ‘godless pray’, not praying to a god but just using a special building for focussed thought, to slow down and ponder life a little.

To make it into a proper challenge I decided to do a pilgrimage of sorts. I worked out a circular walk route starting from my house and visiting three local churches where I would say a prayer, or at least, my style of prayer. I thought it sounded like a fable: ‘A simple man visited three holy sites. At the first he was turned away by a well-meaning priest. At the second…” etc

The first church was beautiful. St Peter & St Paul Church in Runnington. It appeared to be in someone’s back garden, tucked away down a driveway behind some country houses. Although the church was perfectly quiet and peaceful – something I hadn’t experienced in a while living with a three-year old – I felt awkward and couldn’t concentrate on any kind of prayer.

After another half an hour’s walk I came to church number two: St Peter’s Church in Langford Budville. I still had a feeling that I was trespassing and couldn’t close my eyes for very long without fidgetting. Also I think I’d trodden some shit into the church because a pungent smell was rising from the direction of my boots as I bowed my head slightly while sitting in the pew. I thought I would save myself for church number 3.

Church number 3 was closed. In the interest of naming and shaming it was St Margaret’s in Thorne St Margaret.

The idea behind my godless pray was to spend some time in a quiet, sacred place to think about my life and my family’s lives, to ponder existence maybe or at the very least to make some half-baked judgement about the world in general. But I went out feeling impatient, I impatiently closed my eyes and impatiently stomped round the countryside. A lesson to be learnt I suppose.

To be honest I had more existential thoughts while I was walking through the lovely rolling Somerset hills in between churches. Still: mission accomplished. 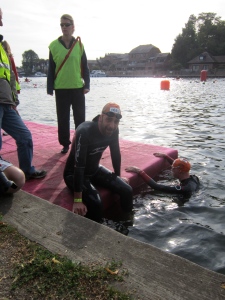 After doing the Severn Mile swim last week I wasn’t quite so nervous but the river did feel especially cold this year and it kind of took my breath away a little, making it hard to keep swimming. It felt hard work but the goal of beating last year’s time really kept me motivated.

It’s such a good event, really friendly and a lovely supportive atmosphere. The river looked beautiful when we got there too, steam rising from the water into the cold morning air in great swirls.